This post is sponsored by Vocalpoint, P&G, and Gillette. All opinions are my own.

Father’s Day is long gone, but I just recently saw this YouTube video by Gillette. If you haven’t seen it yet, take a look before you read any further and be prepared to shed a few tears (I know I did).

Seeing that video made me realize just how much our children can learn without us. Thankfully my children still come to me to answer their questions, and I feel blessed to be able to turn to YouTube for the things I don’t know how to do myself. At the same time, there are so many things that are almost like a right of passage, and I would hate to think they would turn to technology instead of asking my husband or me to teach them how to do certain things.

Shaving is one of the things I want my husband to teach the boys to do. They are only twelve and thirteen, so we aren’t quite ready for that but after watching that video, they all had so many questions about shaving that my husband decided to let them “help” him shave! I’m not going to lie, I was scared, but thankfully the not as scared as the kids! 🙂

We started with Anna who had no concept of shaving cream! I can’t believe that these kids have never seen my husband shave. I guess because I watch him shave all the time I never realized that I must be the only one paying attention.

Trust me when I say that we always have an audience in the bathroom, so these kids are no stranger to seeing my husband shave, but I guess no one was ever really interested until it was time for them to shave him!

I think we can all agree that Anna did a fabulous job!

Watching this child was the highlight of my night, and I haven’t laughed that hard in a while. She is so funny, and she took her job seriously, you know, when she wasn’t singing, finger painting, or laughing her butt off.

Lexi was the first up to use the razor (we decided that shaving cream was enough work for Anna) and she was very gentle. So gentle in fact that I’m pretty sure she didn’t even remove any of the shaving cream.

She’s a daddy’s girl through and through so the idea of hurting her daddy was enough to make her want to leave the room! She was a good sport, though. I’m pretty sure she rinsed off the razor more times than she tried to shave John’s face!

John Jr. had been making jokes all day about how we needed to stock up on bandages before his turn came but when the time came to put the razor to his dad’s face, he got scared just like everyone else. Who knew shaving could be so scary?! I think what surprised me the most were all the questions the boys had.

I think it’s romantic to shave your guy’s face, don’t you? 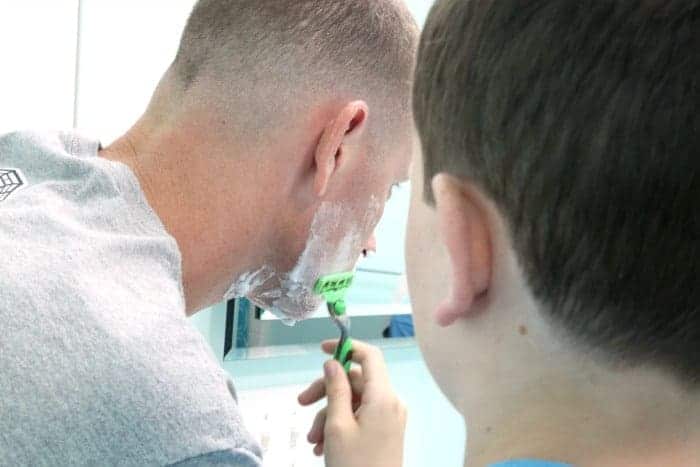 After going through all four children, the shaving cream was starting to dry, and John was ready to get his shave on so I told the kiddos to get ready for bed so John could finally get some much-needed shaving therapy!

I’m sure having shaving cream up your nose for a good thirty minutes has to get annoying but as always John is an amazing dad and a great sport! Gillette® Mach3® Signature Edition Razors are available at Costco

Don’t feel too sorry for John, when I picked up his Gillette Mach3 Signature Edition Razors from Costco I also grabbed his favorite brownie bark and peanut butter pretzels, so he was well rewarded for being awesome! 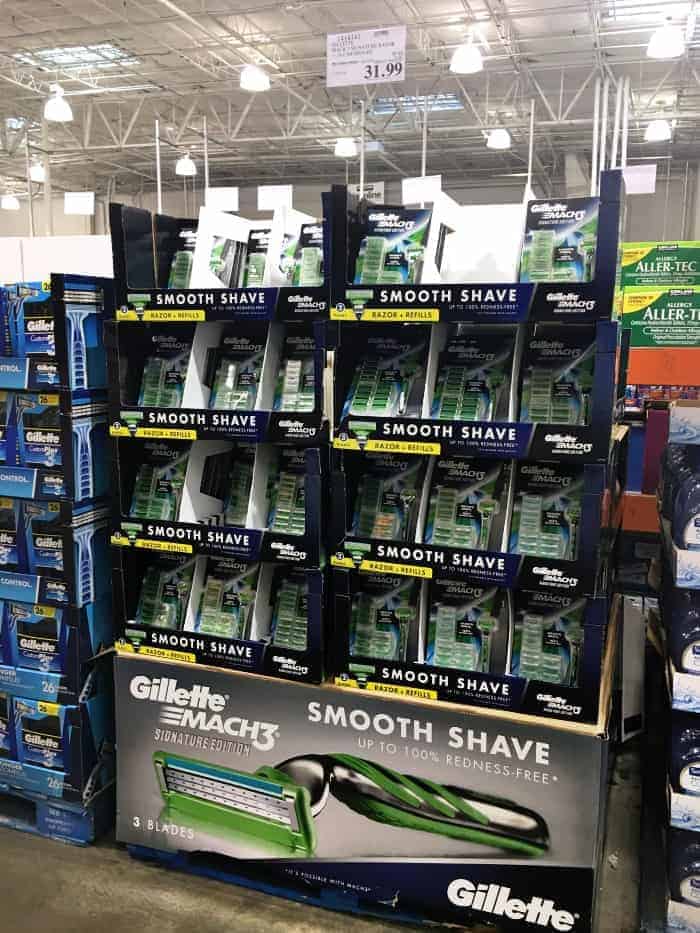 Want to grab some for yourself? With Gillette Mach3 Signature Edition Razors (Save $5), you can declare victory over redness with a smooth shave that’s up to 100% redness-free (it’s possible with Mach3®). I love getting this huge pack because John and I can share the cartridges and he doesn’t complain (yes, I use guy razors!). While you’re there, you might as well go ahead and grab your Gillette Fusion ProGlide 2-in-1 Shave Gel (Save $2.50) too! 😉

So what do you think? Would your husband let the kids shave his face?